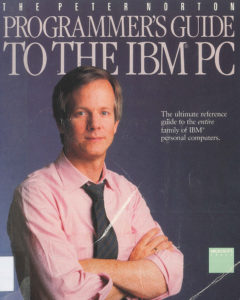 A well-used library copy of The Peter Norton Programmer’s Guide to the IBM PC, published by Microsoft Press (1985). Norton’s pose and pink shirt became an important part of his brand identity in the 1980s. (Used with permission from Microsoft)

As personal computing gained momentum, numerous PC software firms were established that collectively sold thousands of applications for the new platforms. By the end of 1983, there were some 3,000 venders producing an estimated 35,000 PC software products in the commercial marketplace, an increase of 50% from the previous year. The earliest products included operating systems and programming languages from companies such as Digital Research and Microsoft. These tools allowed users to experiment with PCs and write their own programs, although the capabilities were limited.

The real challenge for commercial developers was that the emerging platforms were new and there were few established tools and compilers. Although some of the first PC programmers did have industry experience with mainframe and minicomputer systems, the languages and compilers were different on PCs, and so were the management structures within corporations.

To exacerbate these problems, the resources on PCs were severely limited, with system memory, disk space, input/output, and software services all constraining factors. The software developers who figured out the tricks to make PC hardware and software systems perform well could contribute greatly to a new company’s bottom line. These entrepreneurs could also supplement their income by teaching others how to write programs, distributing their ideas via computer books, magazines, and newsletters devoted to the new platforms.

One such programmer/entrepreneur was Peter Norton (1943– ), who grew up in the Seattle area and attended Reed College near Portland, Oregon. Norton attended Reed a decade before Steve Jobs did, graduating in 1965 with a Bachelor’s degree in Mathematics and Philosophy.

Early in his career, Norton worked at The Boeing Company and the Jet Propulsion Laboratory (JPL). Through the experiences, Norton learned the ropes of the software industry and how to create system utilities for mainframes and minicomputers. When the cyclical downturns of the aerospace industry left Norton without a job, he looked for something different and turned his attention to the new IBM Personal Computer, which had just been released. Norton began experimenting with MS-DOS, writing simple programs in BASIC and assembly language.

Using his knowledge about disk sectors and DOS internals, Norton created a new application program called Unerase that could be used to restore deleted files on a disk that the user had accidentally deleted. Norton recognized how useful the program might be, because people were accident prone when it came to computers, and a tool that could restore files might save many hours of work. Moreover, such a program might have commercial value.

After creating The Norton Utilities, Peter Norton began writing programming books for users of the IBM PC. The first book published, Inside the IBM PC (1983), was the first of its kind, an early “behind-the-scenes” classic in the PC programming field. The text was lauded by programmers and reviewers alike as “an indispensable manual.”

The book taught new IBM PC programmers the ins and outs of the Intel 8080 processor, how ports and registers worked, how to call the ROM and BIOS services, and how to use functions related to early graphics monitors. The book ran to some 300-pages, and it included valuable behind-the-scenes information—exactly the type that Norton had used to create his utilities.

Peter Norton continued to write books and articles, carefully building his brand identity as “the man with the crossed arms and the pink shirt.” In 1985, Norton authored The Peter Norton Programmer’s Guide to the IBM PC, published by Microsoft Press, which emphasized this iconic image on the front cover. The Microsoft book achieved a higher profile than Norton’s early programming titles because it was published by Microsoft Press and it rode the rising fortunes of the new IBM PC platform after the release of enhanced hardware configurations.

The first two editions of the Microsoft Press book sold 500,000 copies, helping to establish the category of “advanced” programming books written by third-party (independent) authors. These substantial sales figures indicate that more than just a few assembly language programmers were peering into the internals of MS-DOS and IBM PCs. Thousands of aspiring developers who had learned the basics of programming using other tools and texts were now turning to professional grade topics. Programming advocates like Peter Norton had “scaffolded” the learn-to-program movement so that it moved from beginning to intermediate to advanced topics.