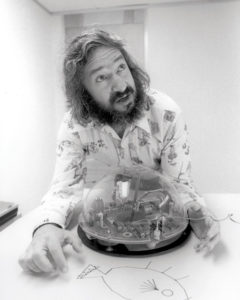 The growing accessibility of computers in the 1960s brought up interesting questions to psychologists and computer scientists. Might computational thinking be valuable for its own sake, outside of professional contexts? Might learning to code support cognitive development in children and adults? What, ultimately, was the purpose of programming instruction?

At MIT, an innovative group of artificial intelligence (AI) researchers began to propose intriguing answers. Their efforts would produce not only a new programming language, but educational strategies that would profoundly influence how Americans taught programming for years to come. The leader of this group was Seymour Papert (1928–2016), a mathematician and psychologist who co-founded MIT’s AI laboratory with Marvin Minsky.

After receiving a Ph.D. in Mathematics at the University of Cambridge (1959), Papert studied for 5 years with psychologist Jean Piaget at the Center for Genetic Epistemology in Geneva, Switzerland. Papert came away impressed by Piaget’s way of seeing children as active builders of their own intellectual structures. Papert came to believe that children readily used the materials that they found about them to learn, and that these tools were most efficacious when they were a regular part of the surrounding culture.

For Papert, such a tool could be the computer, if it could be adapted to the educational aims of teachers and the natural experience of students.

The MIT team began to ask important new questions about learning to use computers in public settings. How might computers affect the way that people think and learn? Can computers be carriers of powerful ideas and the seeds of cultural change? How can computers help people form new relationships with knowledge that cut across the traditional lines separating science from the humanities?

Can people of all ages learn computing principles? If the goal of teaching about computers is cognitive development, what is the ideal age to start young children? Papert was particularly interested in using computer programming to enhance cognitive development. A mathematician by training, Papert believed that computers could revolutionize math instruction if coding tasks were more naturally connected to a child’s developmental impulses.

His MIT group responded by creating Logo, a high-level language and system that utilized visual output (computer graphics) and automated devices (robotics) to teach programming. The Logo language was co-developed by Seymour Papert, Cynthia Solomon, and Wally Feurzeig in 1966, and the system made its debut in Cambridge, Massachusetts the following year. Within a decade, Logo became the leading educational computer language in the U.S., rivaled only by BASIC in high schools and Pascal in university settings.

Logo’s most iconic learning feature was the turtle, an on-screen shape that showed the result of the language’s movement commands. Some implementations of Logo also featured an animated Turtle Writer robot, which students could program to draw shapes and move around the classroom. (The robots were also equipped with sensors that allowed them to avoid obstacles and learn from their environment.)

When programmers typed in Logo commands at a terminal console (or later, on a PC keyboard), the commands produced line drawings and other shapes that the turtle could create—the so-called “turtle graphics.”

The nationwide distribution of Logo teaching materials began when official textbooks were published and sold from coast to coast. One of the first was Learning with Logo (1983), written by Daniel Watt, a teacher and writer who was invited to join the MIT Logo team in 1976. More programming primers followed.

By 1986, it was estimated that 40% of American school districts had acquired Logo and were using it to introduce programming fundamentals to students.