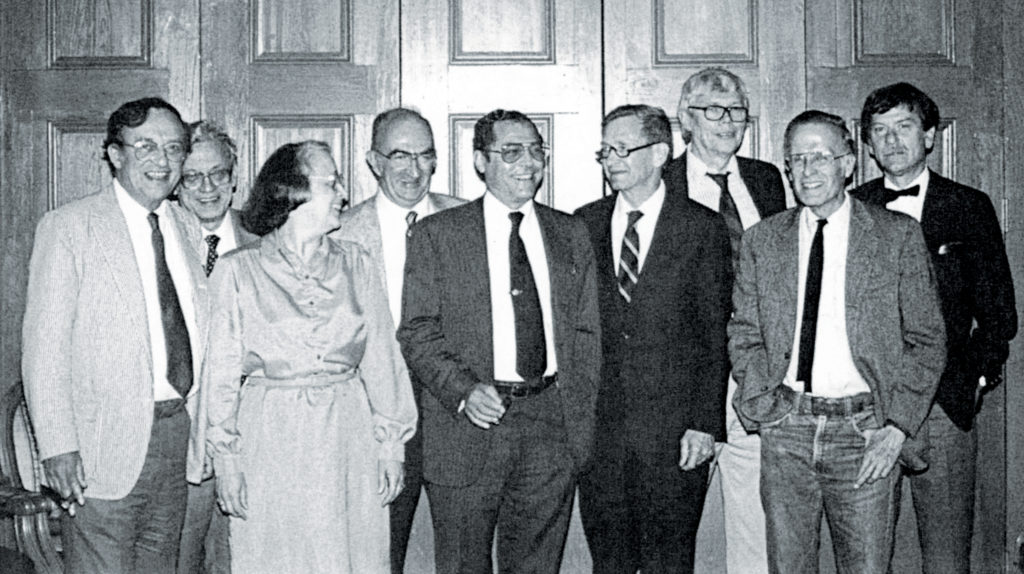 A 1982 gathering of the engineering team that contributed to IBM FORTRAN in the 1950s. (Courtesy of the Computer History Museum)

Code Nation explores the origins of software development practices in the United States, from its beginnings in research labs and universities, to government, corporate, and educational contexts.

Few systems were as important for the popularization of programming as FORTRAN, a language initially designed by John Backus and a group of research scientists at IBM. The company released FORTRAN I in April of 1957, and the language and compiler quickly became a standard for software development in the U.S. and Europe.

Important for its adoption, IBM distributed the original FORTRAN software and materials for free to its customers who owned IBM hardware, eventually attracting the interest of a standards organization that built consensus around the new language and its features.

FORTRAN was created for solving scientific and engineering problems, and its internal structures were designed to process mathematical equations in a straightforward way. The language included standard mathematical functions, conditional statements, looping structures, variable types, arrays, and other features that would become customary in high-level languages.

Chapter 3 in Code Nation describes the origins of FORTRAN and other high-level languages like COBOL and ALGOL. The chapter describes how new programmers learned to write FORTRAN programs using a key punch device and 80-column punched cards. In batch-processing contexts like these (i.e., before interactive terminals with keyboards), it might take days to fix a relatively simple logic or runtime error in a program. The complexity was a barrier to learning how to code.

The first official manual to document FORTRAN arrived in October 1956, when IBM released its Programmer’s Reference Manual. This formal guide offered a short introduction to FORTRAN and gave experienced programmers the documentation they needed to use the compiler on the IBM 704 system. Soon after this, a selection of user-friendly primers teaching FORTRAN coding skills began to appear. These introduced the language to a broader audience (i.e., not just IBM customers). 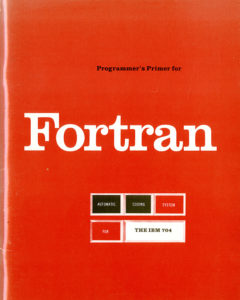 Grace E. Mitchell’s Programmer’s Primer for FORTRAN (1957) was among the most influential books of this era for budding technical writers. Although Mitchell was uncredited in the text and the book was published as an IBM reference manual, it was just as pioneering as the tutorials published by mainstream publishers.

Mitchell joined IBM’s FORTRAN group in the Spring of 1957, and she made important contributions to the FORTRAN II compiler release, as well as IBM’s newest operating systems and programming tools. Although Mitchell possessed formidable engineering skills, her Primer was designed for non-programmers who were preparing to take their first steps with a new language. Mitchell’s primer offered a concise analysis of FORTRAN’s core features, including some of the complexities only hinted at in the original Reference Manual.

Daniel D. McCracken also established his reputation as a programming author, publishing some of the first general textbooks about software development in the U.S. McCracken’s Guide to FORTRAN Programming was so successful, it sold an astonishing 300,000 copies. The title has been described as the first-bestselling book for programmers in the U.S., an achievement related to McCracken’s acumen as a writer, Wiley’s skillful marketing, and the emergence of FORTRAN as the era’s dominant high-level language.

Through FORTRAN, programming instruction had become an important avenue into the world of computing. The stage was set for the movement to grow, and for new groups to learn about coding.